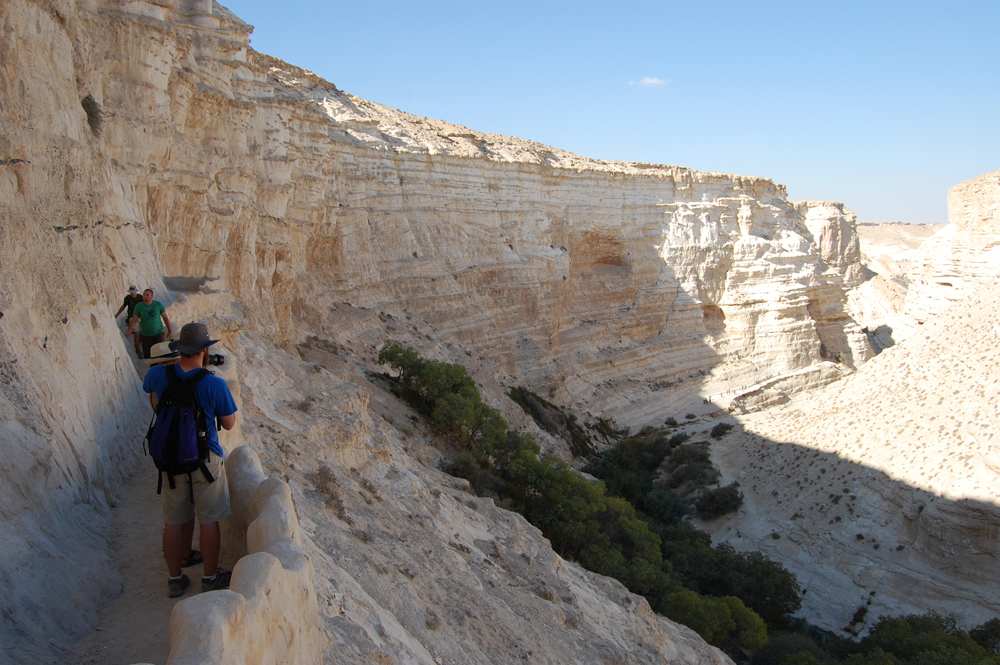 I love the Elijah story, partly because it has so much to teach us about what role doubt plays in the life of a believer and, partly, because I think that the church in America has done a poor job of handling and responding to individual believers’ natural periods of doubt. We tend to excoriate anyone who is brave enough to actually voice their internal dialogue of confusion about who God is, or who Jesus is, or how I am supposed to relate to either. For many churches in America, the idea of the dark night of the soul is as foreign as the dark side of the moon.

I have written quite a bit about Elijah before (find more posts here). I guess you know a story is good when, each and every time you return to it, it has something more to reveal, some new element you’ve never noticed before. The story of Elijah is that way for me.

Recently, in preparing for a teaching, I noticed Elijah travels to a place I had never noticed before – the Negev wilderness

By the time Elijah finds himself in the wilderness, he has already had one mountain top experience where Yahweh showed up powerfully in the form of thunder, lightning and rain. This created a problem for Elijah though. After the triumphant clarity of the initial mountain top confrontation with the Prophets of Baal, something far more opaque crept into Elijah’s psyche when he was confronted by Ahab’s foreign wife Jezebel:

The God who answered my prayers looked an awful lot like the God the prophets of Baal were praying to. He showed up as a strike of lightning, a voice of thunder, and a fertility giving rain throughout the Jezreel valley. Exactly how Baal would have shown up!

When Elijah met Jezebel there was a very real possibility that Elijah didn’t know who the god was that had fulfilled all his prayers on Carmel. Elijah had come to a major crisis of confidence. He doubts himself, he doubts his god and he runs for his life before Jezebel.

Eventually, he finds his way to a second mountaintop experience, this time at Sinai, where God shows Elijah that, even though he can manifest himself in earthly phenomenon like the other gods of the ancient near east, he was different. He was also transcendent, otherworldly, able to manifest himself in the “thinnest of silences” or nothing at all.

In the journey between those two mountains, Elijah finds himself submerged in the wilderness. There, in the desert, his crisis of uncertainty is so great that he wishes for his own death. Take a look at 1 Kings 19:3 and 4:

“Then [Elijah] was afraid, and he arose and ran for his life and came to Beer-Sheba, which belongs to Judah, and left his servant there. But he himself went a day’s journey into the wilderness and came and sat down under a broom tree. And he asked that he might die, saying, ‘It is enough; now, O Lord, take away my life, for I am no better than my fathers.’”

As you might have guessed, rarely is the setting incidental to the story. Elijah is a day’s walk into the wilderness around Beer-Sheba, most likely this meant that he was somewhere just north of the wilderness of Zin.

That location should ring some bells for you because it just so happens to be nearly the exact location of the Israelites when, fleeing Egypt, they commissioned twelve men to spy out the land which was to be their inheritance. Only Joshua and Caleb would return from that trip into the Wilderness of Zin and the southern lands of Judah believing they could accomplish what the Lord had set before them, as the rest of the spies were plagued by doubt. A doubt that would spread like wildfire and necessitate the death of a generation before the children of Israel could enter the Promised Land.

Elijah believes himself to be struggling with a doubt on par with that of his fathers, the Israelites who failed to enter the land of Canaan when they were supposed to, necessitating his death just as it necessitated theirs. This is deep doubt indeed!

But as I continued to study this part of the story I was caught short. I marveled at not having noticed it before. Elijah’s second mountain top experience at Sinai was not God’s initial response to Elijah’s doubt. Indeed, God responded to Elijah’s doubt right then and there, in the wilderness, in the middle of Elijah’s dark night of the soul.

“an angel touched him and said to him, “Arise and eat.” And he looked, and behold, there was at his head a cake baked on hot stones and a jar of water. And he ate and drank and lay down again. And the angel of the Lord came again a second time and touched him and said, “Arise and eat, for the journey is too great for you.” And he arose and ate and drank, and went in the strength of that food forty days and forty nights to Horeb, the mount of God.”

What was God’s initial response to Elijah’s doubt?

Was it judgment? Did God say, “I guess you’re not actually part of my family after all!”

Was it condemnation? “Elijah, I can’t abide your questions and suspicions any longer.”

Was it Rejection? “Perhaps you shouldn’t be serving in ministry right now; I’ll find a new prophet.”

God’s initial response to Elijah’s doubt, while he is still in the wilderness, is sustaining care!

God’s initial response to Elijah’s doubt is recognition of its rootedness in our humanity!

“for the journey is too great for you”

In other words, God’s initial response to our doubt, the response that happens while we are still in the middle of the wilderness — that response, it is all about grace! It is a response that says, “Yes, you have found yourself steeped in the dark night of the soul but you are my chosen people, my chosen prophet, and I have called you out for a purpose. Let me sustain you for forty days, or forty years, or the rest of your life, but through this time of hardship.”

where we are at.

Our churches would do well to consider Elijah as they interact with those who are brave enough to give voice to their own dark nights of the soul. Not the Elijah on Carmel or Sinai, but the Elijah that was once alone in the Negev wilderness.

I pray that, as you experience your own period of doubt, that you would be relieved in the knowledge that God knows the “journey is too great for you.” May you daily, “arise and eat,” sustained for the journey to Sinai set before you.

After twelve years of work, filmmaker Tim Mahoney is finally releasing, for one night only (tonight) his documentary, “Patterns of Evidence,” about the archaeological and historical evidence for the biblical exodus. I had the opportunity to view a pre-released version of the film back in November and can attest to the production value that twelve…